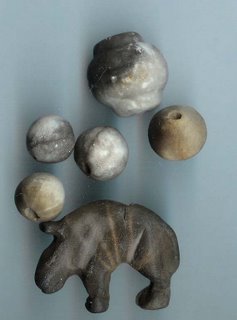 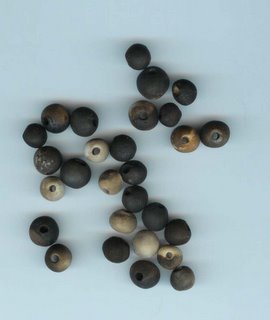 coarse saw dust. To top off the can I threw in about 5 banana peels. I had heard that they help with the color. I do believe that these small beads that had the copper carbonate on them are blacker than any others I have fired. They have a real raku look to them. Seems this firing was very good on setting up a reduction atmosphere. I think that the small black beads will look really great strung with silver findings and spacers.
It seems that I like nights when the wind is howling to post my blog. Tonight there is yet again another attempt up here in the North Country to have some more winter. Makes me want to do another firing. But I am out of bisqued beads. The ones I had set aside for a saw dust firing, I have in the kiln right now in a porcelain slow glaze. I have just begun to experiment with porcelain and am beginning to like it. At first, the viscous shiny surface put me off, and the way my stains didn't come out the way they do at low fire really upset me. But I do love that silky feel.
The small beads in the photo above were wired to a metal rack which is the invention of Sue Wilcox. This one has withstood quite a few firings and doesn't seem to be falling apart yet. It is made with angle irons. It is the same rack that is on the first entry in this blog. The point I am trying to get to is that the little beads were affixed to this rack whereas the larger beads that had the thin copper wire in them were placed at the top of the can and worked their way down with the fire. The small ones were only in the fire when it reached them but seemed to have been more affected by the reduction atmosphere than the larger beads. I don't know why this is. Perhaps it was the bananas!
Well Winter, keep on howling, because for me that is the best weather for beading and late night blogging.
Posted by Mary Harding at 2:30 AM No comments: