At the beginning of the month, when ArtBeadScene posted this wonderful painting by Jack Savitski, I was immediately inspired to make a piece of jewelry.  My first thought and one I carried with me until it came time to actually make the piece was to use one of my toggle clasps, the one in the pic below.  The sun in this painting made me think of it.

What I like about this painting, and many primitive artists' work, is the way it makes my mind think in universals.  I felt the sphere of the earth and the many trials and joys of life when I looked at Jack Savitski's painting.  And I felt I could make a piece that reflected that sentiment.  But I wanted my piece to be happier than Jack's.  It sounds as if he had a very hard life, with little to look forward to.   He had his art and that must have been wonderful for him.  But....

I decided to use words in place of the people in his painting.  I chose words that I thought I would like to have represent my life.  I chose to focus on a life span as the time frame instead of a day.

When it came time to put the bracelet together, I had sold the toggle clasp that was my original inspiration for the piece.  I had another one sort of similar but the colors were not quite right. 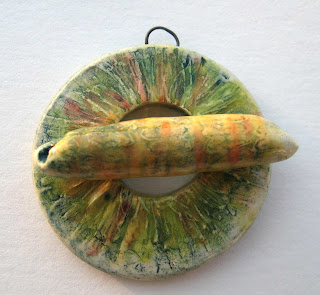 Then I happened upon the one I ended up using and it was great for the color scheme that was developing. 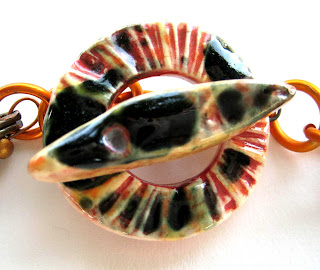 I found those rust gold jump rings when I was at the Bead show in Montreal.  I just thought they might go well with copper.  And in the end they went super well with the copper, I think.
This is one of the few pieces I have ever made a drawing of before hand.  The words were helpful to refer back to as I made the stampings over a period of several weeks. 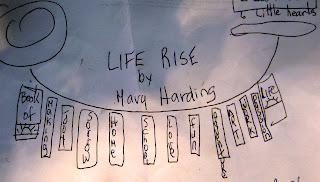 Again, when it came time to put all these ideas together into a piece of jewelry, things did not happen as planned.   I found that my piece  was not a bracelet at all-- it was uncomfortable and the words were not really readable.  So a necklace was born.  I decided to name it Life Rise to refer back to the inspiration title, Sunrise. 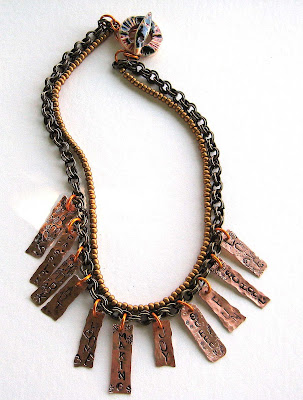 I have really enjoyed the process of making and creating this necklace.  It has been exciting to feel so inspired.  Thank you ArtBeadScene.  And thank YOU for reading my post about it.
Posted by Mary Harding at 1:37 PM 4 comments: I attended the Canadian Oasis Bead Show in Montreal, Canada over the weekend.  I think that was a good excuse to return to one of our favorite summer cities.  I took a class with Manon of La Perlerie Atelier-Boutique Inc.  It was call Inuit Chic.  You can see a sample of the necklace on the the white display.   She was a great teacher--very friendly and charming as well.  It was fun to be in an environment of French speaking people.  Although she always translated for me.
I was especially taken with the necklace she was wearing.  She tells me it is made from circular brick stitch.  Each circle took about 2 hours to make.  She tells that it is not for sale.  She likes to wear it to start conversations.  She was happy to agree to me taking her picture and writing about her class on my blog.
You can visit her shop via the web here.  She is located near Montreal in St. Eustache, Quebec. 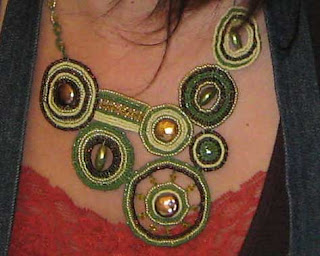 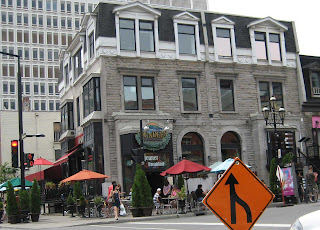 Montreal is especially fun in the summer since there are so many delightful outdoor restaurants, cafes and bistros.  We spent a lovely evening eating outside in a bistro just a few steps from our hotel.  The evening was warm and the food delicious. 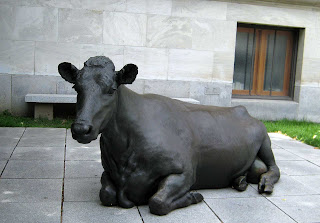 This peaceful and beautiful bovine model is in the garden of the Museum of Fine Arts.  We had a wonderful visit there.  I filled up on Canadian Group of 7  paintings and an artist I had not heard of before, Marc-Aurele Fortin  1888-1970.  He does wonderful landscapes with clouds pushed into the foreground. 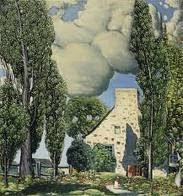 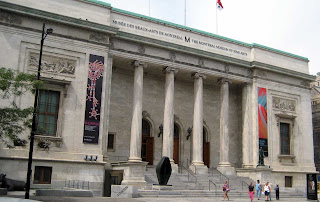 New to My Etsy Shop 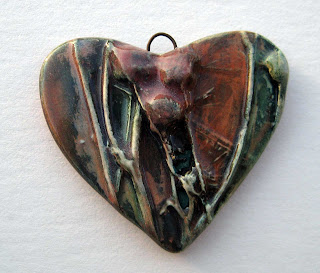 Ceramic Heart Pendant Art Deco Style
Some new work on my Etsy Shop
Hints of Fall colors-- oh No, not so soon. 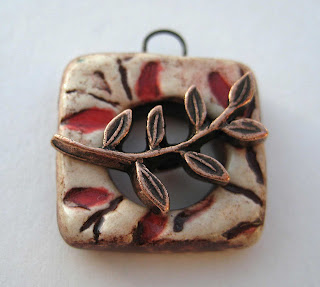 I made some of these for an order and then just kept going.
I love making them.
Posted by Mary Harding at 3:36 AM 9 comments: