Foremost Focal, the great online store that has me as its Featured New Artist, has had a great idea. They are going green. Now they have a section on their site where beaders can learn about all kinds of recycling ideas. They say " We want to hear how you reduce, re-use, recycle and our favorite new buzzword - repurpose" anything and everything, not just bead related recycling. But recycling in the jewelry making world means fun jewelry and fun techniques. I have recently purchased a wonderful book called Semi Precious Salvage [creating found-art jewelry] by Stephanie Lee that has excellent information on how to repurpose lots of old stuff into very stylish jewelry.
To share your recyling ideas, you can contact Foremost Focal at info@foremostfocal.com Thanks so much Chris for getting this going on your webstore.
Posted by Mary Harding at 9:21 AM No comments: 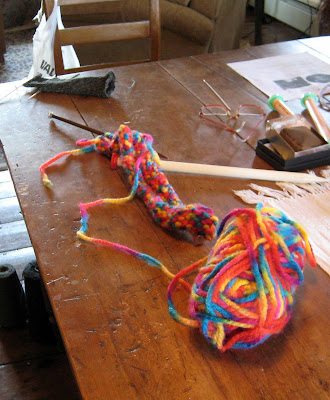 I have always hated to knit. I was taught as a child and just found it to be very frustrating. And in fact Isis has tried to teach me in the past and I still hated it. But not too long ago our little artist group that makes up Isis Saturdays wanted to knit so I joined in. I had heard about and seen a one hour hat project that looked doable before I would become too frustrated. It was big yarn and big needles. In fact I had given my daughter-in-law needles and yarn for the project at Christmas. So we all agreed to try the hat since none of us are knitters. I had a lot of yarn around the house from when I was making bead crochet bracelets so I took some of that and some size 13 needles I had around for making large holes in beads for a macrame wall hanging project several years ago. I had a good attitude I thought when we got there and Isis was a magical teacher. This time I seemed to get it, a bit. I knitted and purled and so on until my arms ached ( I had very long needles and my knitting was a bit too tight.) We had a great lunch from all the wonderful dishes each of us brought. 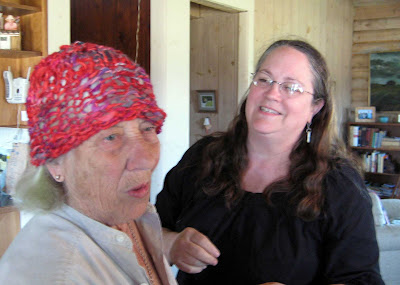 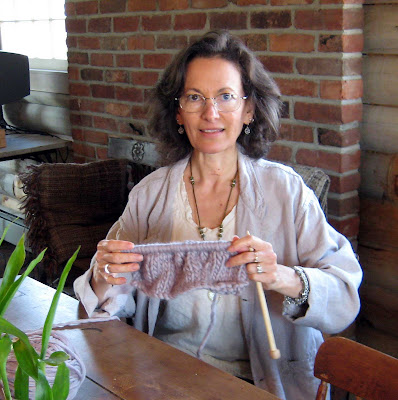 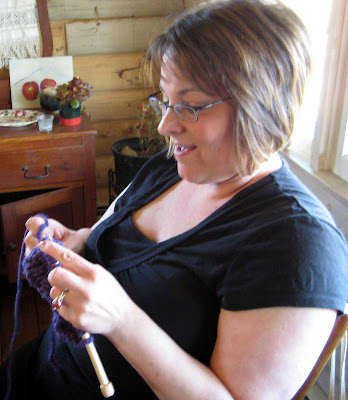 (Kim knitting on her son's hat)

and Kim almost did.
I had some rows done. When I got home I put it away. Later in the week I showed it to my husband and he thought it had promise. During the week I knitted away on it. Later I found out that I had made up a few knitting stitches. But it worked and the hat was finished. Only problem, a little too tight. So I started another. Meanwhile I decided to get some circular bamboo needles (Isis recommends) These were a great improvement. After awhile the needles get very slick and the yarn just flies off and makes the whole process a real pleasure.
Hat number two got finished that second week. It was great, colorful and fun to wear but perhaps a little too short.
Now with my circular bamboo needles I embarked on hat three. I ran out of yarn halfway through and picked up some chenille I had around for the top. For size it came out perfectly. If you don't look too closely, you don't see the holes, mistakes and made up stitches. But to wear it, it feels wonderful and is rather stylish I think. 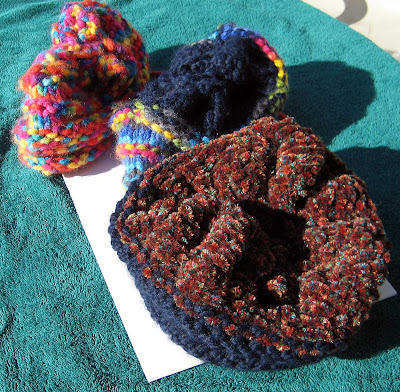 My three hats. From left to right beginner hat--- to the one I like the best.

Many thanks to Isis our magical teacher. 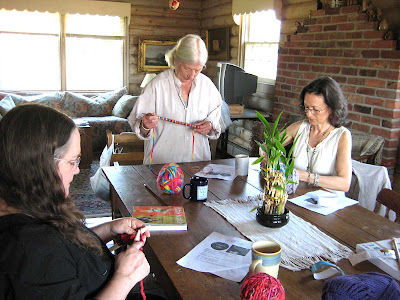 Posted by Mary Harding at 8:00 AM No comments: 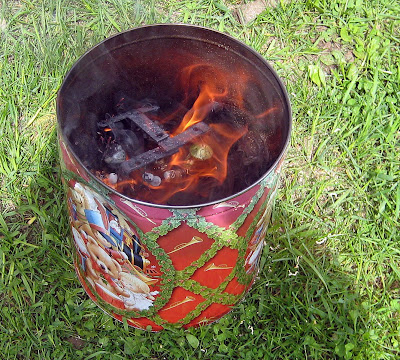 Luckily the second Saturday of my Ceramic Bead Making class turned out to be beautiful and sunny since we were outside glazing beads and raku firing them. 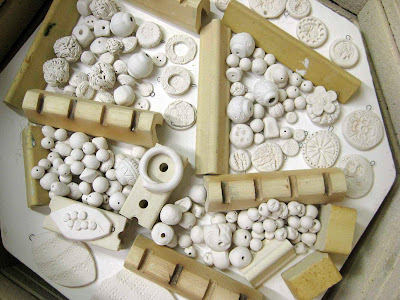 Here is a bird's eye view of the kiln of their fired bisque ware ready for glazing. I did slip some of mine in here too somewhere. 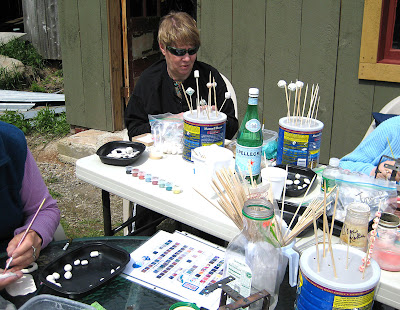 We all sat around two tables up in front of the entrance to my studio. This seems to be a great spot since there is electricity and we have quick access to my studio in case we need something. 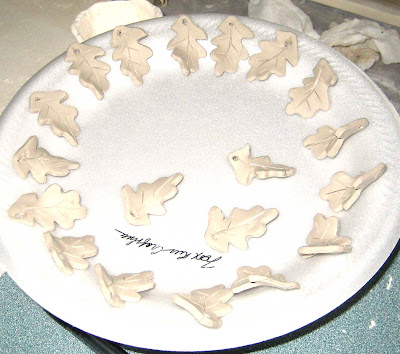 Sally Hartman stopped by and made some oak leaves and fired a couple of beads. She makes lovely smoke fired earrings out of these leaves. 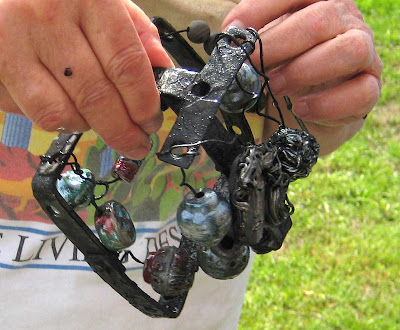 Here is a bead rack after the beads were quenched in cold water and the straw and sawdust rinsed off. You can see that there are some beauties there. 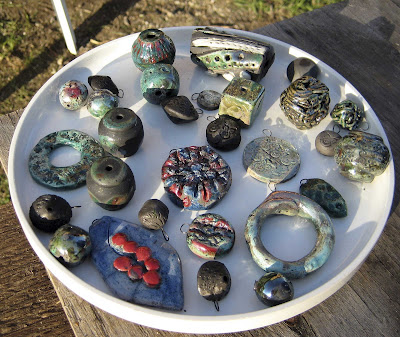 These are some of the raku beads (many went unphotographed since I was so busy I forgot to do it sooner) after they have been scrubbed with Ajax and dried. They are being photographed in the late late afternoon sun. I pulled the last load of beads out of the kiln about 6:00 PM. We had started at 12 Noon. Wow are those colors great!! Everyone made great beads. What a wonderful day we had. I am so glad that we did this!!

Posted by Mary Harding at 7:39 AM No comments: 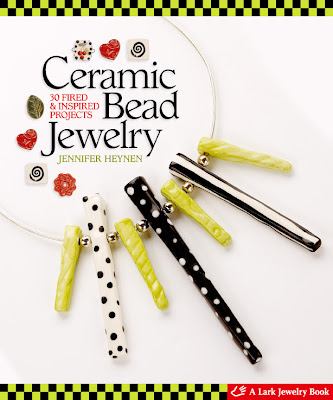 A couple of days ago I received a copy of Jennifer Heynen's book Ceramic Bead Jewelry, published by Lark, in the mail from Amazon. I was really surprised to be sent a copy before the official publication date which I thought was June 3. I had preordered to the book at least a month ago. So I want to give everyone a chance to learn about this wonderful new book and how to order it. Of course you can get it from Amazon.com for a very nice price. I also have the book listed on my website in my favorites category and if you click on the title there it will take you directly to Amazon.com.
This is a wonderful book and especially so because of Jennifer's friendly and enthusiastic voice which comes through on every page. Her excitement about working with clay is catching.
The book covers all the basics of making clay beads and will be a great help to anyone starting out in ceramic clay. I found the directions easy to understand and was pleased to learn some new things myself. I was especially happy to find a very easy way of making molds and plan to try it this week. Her directions for making bead shapes is also easy to follow and had some new ideas for me.
The second half of the book is devoted to making jewelry. She has 30 different projects for the reader to make. Again the directions are simple and easy to understand and the jewelry is original and looks fun to wear. I especially like the Multi Strand Bracelet and the Square Bead Bracelet.
I hope all of you who are new to ceramic bead making will take a look at this great book which is the first major publication on the subject.
Congratulations Jennifer. We at BOC salute you and your achievements.
You can read more about Jennifer on her blog at her website and her Etsy Store
Posted by Mary Harding at 5:54 AM 1 comment: 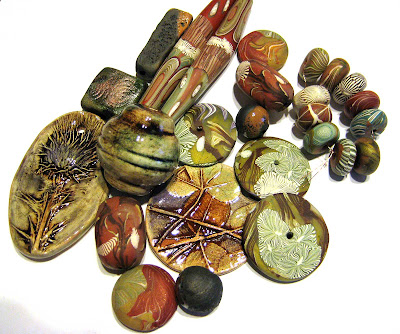 Beads for the ABS Collaboration with Humblebeads and Lorelei

I have the good fortune of being a part of the Art Bead Scene Collaboration Exploration with Humblebeads and Lorelei Eurto We all have the same set of artists beads(see photo above)--some made by Heather and some by me. I received mine in the mail a few weeks ago with the May 5th deadline. Excited and nervous best describes how I have been feeling since. I have been very challenged by this project and have been pretty pleased with the results. I love working with Humblebeads. The colors have been delicious and I have enjoyed every moment playing with the beads and possible combinations of colors. Since I am not used to making jewelry with other artist beads, this was a very new experience and rather inhibiting at first. I think I began to loosen up somewhere along the way and that was good. I tried some materials I had never used and that was good. In fact, I found ways of stringing my pendants I would have never explored if it weren't for this project. I found my pendants hard to work with and all along I have been wondering what in the world Heather and Lorelei will make. It has been an interesting inner dialogue thinking of our parallel experiences and it has felt like I had company on my journey. I can't wait to see what they have made.

Here are my collaborations. 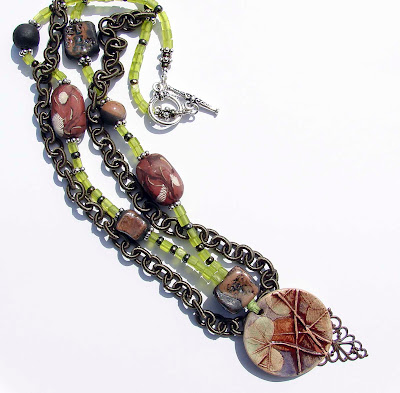 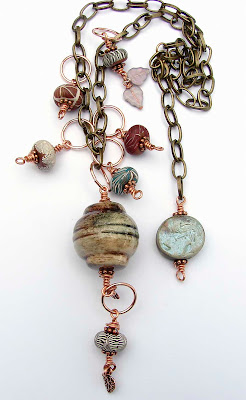 Here I have wire wrapped the Humblebeads with copper wire and copper flowers. I love the way the copper contrasts with my large round bead's shades of green and brown. The brass colored chain seems to pick up colors in both of our beads. 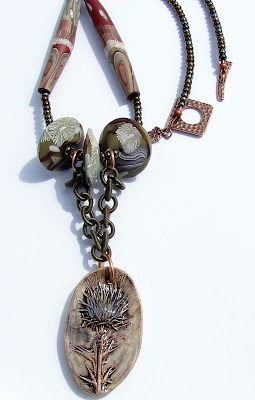 Here Heather's lovely disk beads and long tubes pick up the colors in my Thistle pendant. The dark green fiber chain complements her beads well. See what I mean about delicious colors!! 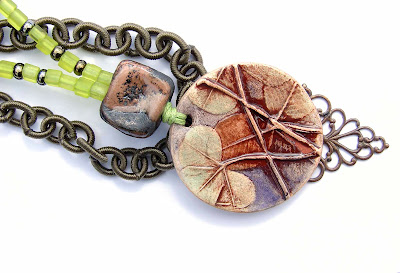 A close up of the Clover Pendant necklace.

The freeform peyote stitch necklace I began first and finished last. I actually worked on all 4 pieces at the same time so that I would be able to have some of Heather's beads for each piece. I figured the peyote piece would use the most and that seems to be true. I don't have any of her beads left over. I struggled with this piece and had to add a pendant to the front that was not one that others had. I love the way the colors have gone together on this piece and I totally enjoyed making it once I was over the hard part. But that seems to be the way it is with freeform. Always a point in the piece when I think I will have to throw it away (figuratively) and then if I persist and wait a while it will come together. 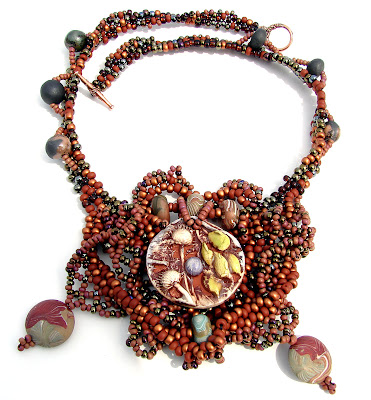 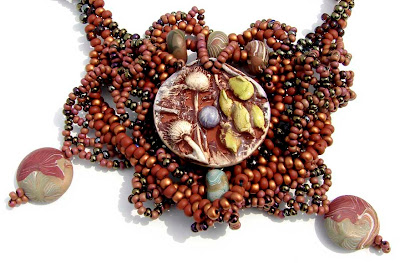 Close up of the peyote necklace.

Thank you Art Bead Scene, Humblebeads and Lorelei for being in this project with me. It has been a super great experience.
Posted by Mary Harding at 6:04 AM 6 comments: 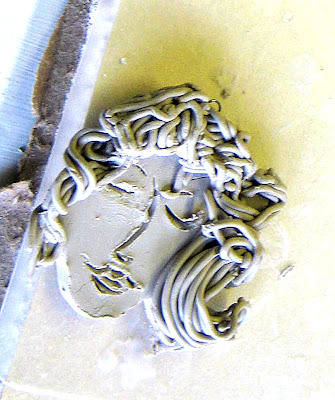 These are pictures of from the ceramic bead making class I taught last Saturday. These are shots from Day One. Students are working in low fire white ceramic clay so that they will get good, bright results when they glaze their beads and pendant. We made beads, pendants, toggle clasps, and links with high temp wire. 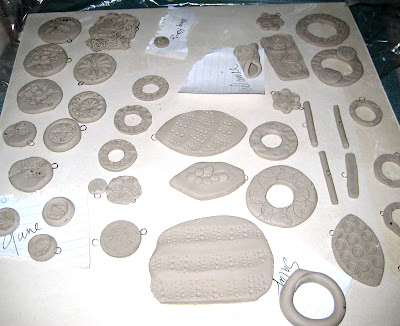 Here are the flatter pieces, links, toggles, pendants. The large flat piece in the front has markings from a beautiful sea urchin from Belize. Students were so inventive and extremely engaged in their work. 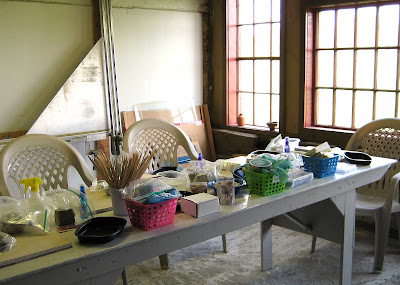 Here is the class set up in our Barn Studio. There is a wonderful view of the now green, green pasture out these window. I like the class size around 4 students and that is just what we had. Plenty of time for everyone to get the attention they need and plenty of room at our long table that hails from another ceramic studio begun many years ago at the Handweaving Museum in Clayton. We got this when they were remodelling several years ago. 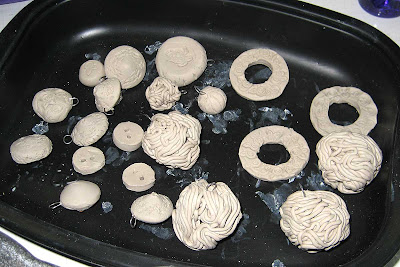 We kept our ready to dry work in little plastic trays or these ridged plates. They will go out into the entrance way to my studio which has shelves. It is a bit drier there than in my studio which is below ground level a bit and very moist-- a good and bad quality. 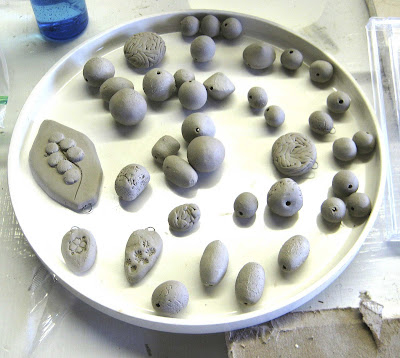 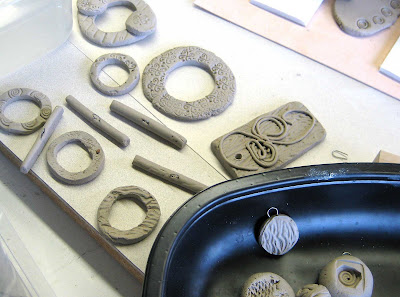 The fragile flat pieces I topped with another piece of plaster board later to help prevent warping. 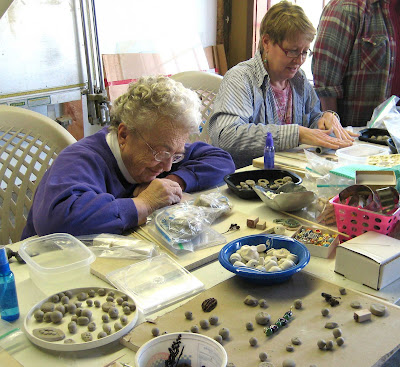 Students very concentrated on their work. All made beautiful pieces. It is such a pleasure to be around such creative folks. Thank you for coming.
Next weekend on Day Two we will be glazing the beads and doing some raku firing of some of them. I'll post those pics afterwards.

Posted by Mary Harding at 6:55 AM No comments: