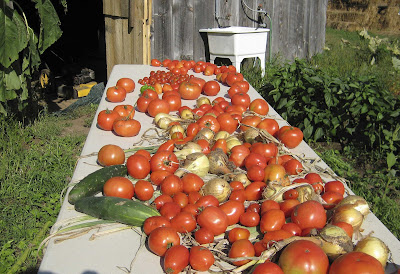 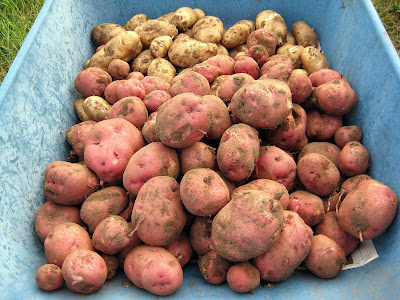 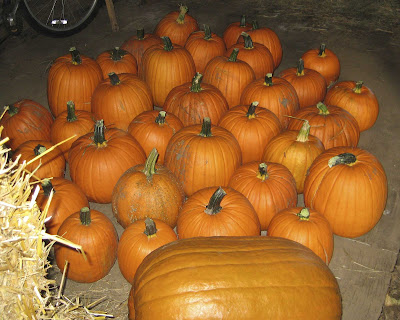 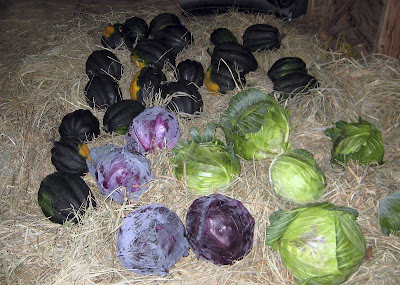 In August, I didn't get into my ceramic studio much due to family visitors and finally some sunshine later in the month. I harvested beads from the earth rather than making them out of clay. I love all these veggies and am still in the process of preserving them for delicious winter eating.
Posted by Mary Harding at 7:34 AM 1 comment: 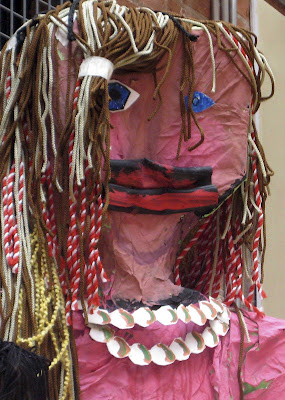 Although the late Peter Francis, Jr (1945-2002) writes from the perspective of a bead collector, (what beader is not a collector as well) I thought starting this series on beaders with Peter Francis, Jr. was most fitting because his research goes back to the many places where beads were first found. He points out that beads are the first known art form of humans, emerging over 40,000 years ago. In fact they predate cave paintings and carved figures.
The Late Peter Francis, Jr. (1945-2002) was a pioneer in the beading movement that we are continuing to experience today. I first became aware of his work when I was surfing the net on Compuserve in the late 80's early 90's. He had a webmall for beaders, he was the first I know of to have shops for beaders to sell their work on the web and he was a very knowledgeable bead collector and researcher. You can visit his original website here. In addition to his extensive research on the history of beads, he had a bead museum in Lake Placid, NY. Here is a link to photos of his museum. There are plans to have his entire collection placed in the Bead Museum in Glendale, Arizona.
I have a copy of his book Beads of the World which is a fascinating look at the history of beads. There are many photos of different beads from all over the world. He also includes some old photos of primitive bead making techniques and some great old drawings of how glass beads were made in the past. I especially love the drawing of three women at a table making wrapped lampwork beads, around 1600. Not so different from now.

" What's a Bead?A survey of dictionaries and encyclopedias will reveal that the usual definition of a bead goes something like this: "A bead is a small, round object with a hole in it used for necklaces, etc."I do not find this satisfying. For one thing, many beads are not round. For another, they are not all small. They do not all have holes, and their uses go far beyond necklaces.My definition would be more on these lines: "A bead is an object capable of being strung and used for the many tasks assigned to it by various cultures. These include (but are not limited to) symbols of status and group membership; ornamentation of people, animals, and things; mnemonic devices; counting devices; amulets and talismans; and others."

I found the following link here that shows a video of Peter talking about African Beads on a UK TV program. It gives you a great sense of his knowledge and love of beads. I found that it would work on my Windows Media Player if I scrolled down to the link for people who can't get it on the screen provided i.e. the 14 mb .wmv file.
I hope that you will spend some time getting to know Peter's work, if you don't already, and enjoy remembering him as I have done in writing this article.
Posted by Mary Harding at 5:38 AM No comments: 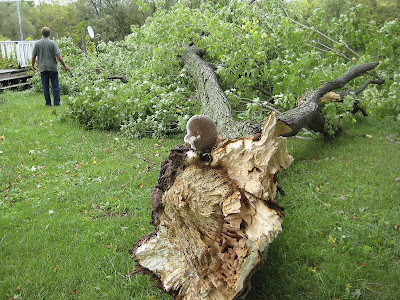 We were away and missed the storm. But a giant branch from one of our 100 year old Maple trees was torn off by the strong winds that chased Ike out to sea. Thank goodness it was a graceful fall. It just missed our car, our house and our satellite dish. We feel so lucky.
Posted by Mary Harding at 6:06 AM 2 comments: 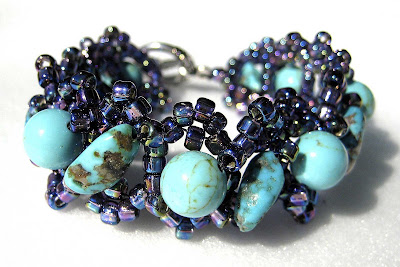 Part of my summer vacation was indulging in a nonstop beading marathon and not going to my ceramic studio. I had a great time but do have trouble sitting still for long periods of time. We remedied that by going camping afterwards and doing a lot of canoeing, biking, swimming and walking.

Here are some pics of both of my fun summer activities: 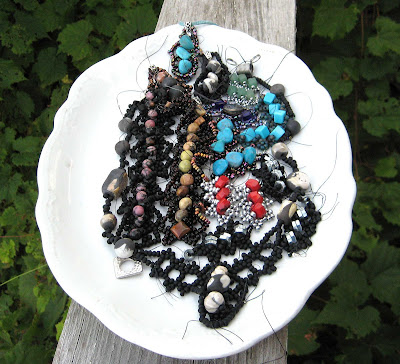 Here are some of my beaded pieces on a lovely china platter in the almost finished stage. I still hadn't finished the necklace below in this pic. Later I tied and cut off the working threads. I got a chance to try my new thread burner and it works really well for this kind of task. 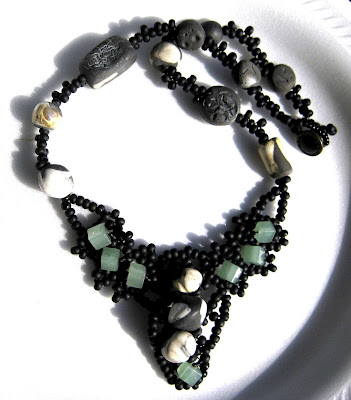 This is a pic of my first right angle weave necklace. It was a challenge. I had to take it apart several times before it came out the way it did. I like the color combo and it is fun to wear. 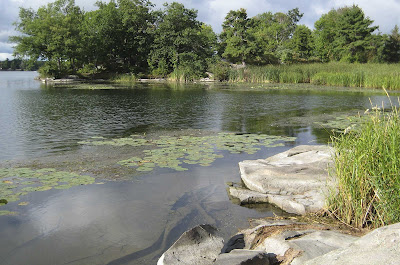 This is the view from out campsite cabin looking out on Goose Bay. I spent quite a bit of time reading Looking for Alaska in this gorgeous spot. 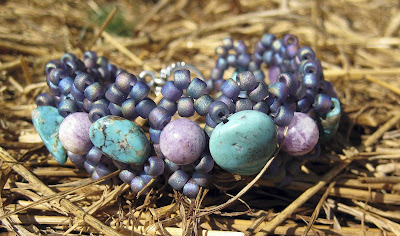 A new right angle weave bracelet photographed on a bale of hay that is part of a hayhouse we made for the grandchildren to play in when they visited. I can't bear to take it down now that they are gone. It brings back such joyful memories. So now I am photographing jewelry on it. 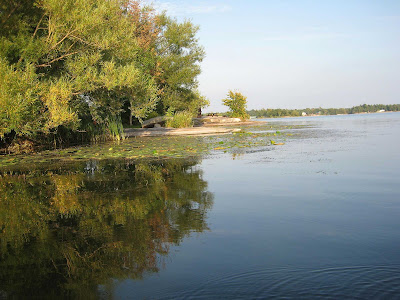 Canoeing on Goose Bay. Here the inlet opens out onto the Bay. The mightly St. Lawrence River is just around the corner.

And Then the Sun Began To Shine 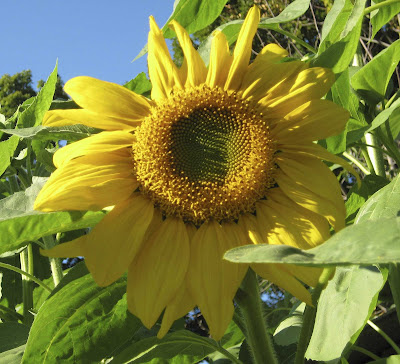 After weeks of rainy and overcast days this summer, about the third week in August the sun began to shine. And at long last our giant sunflowers began to bloom. I was thrilled.

To enjoy these sunny days I took off some time ( I skipped my August Newsletter and blogging) and spent them enjoying the fine weather. We even went camping. What fun. I guess summer is ending now as it has gotten colder on some days and the sun has become more scarce as large gray and white clouds keep rolling in. So now it is back to work and the normal flow of life. I love that too.
Posted by Mary Harding at 5:45 AM 3 comments: