Inspired by Reading Book Club October: My Mother She Killed Me, My Father He Ate Me Edited By Kate Bernheimer Bats, a black cat, a full moon, mournful howling sounds and a young newly wed bride fill out this Hansel and Gretel inspired story by Francine Prose, who in turn inspired me to make my necklace for this month's blog hop.  A necklace I have titled The Messenger. 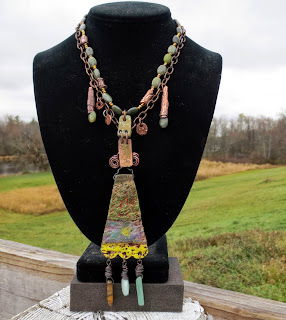 The Messenger  Necklace by Mary Harding

For Andrew Thornton's  Inspired by Reading Book Club October selection we read from My Mother She Killed Me, My Father He Ate Me edited by Kate Berheimenr.  What a treat!!   And I surely would have missed it if I had not been part of this reading group.  Thank you Andrew!!  I don't usually like short fiction but reading modern Fairy Tales is very different from reading  modern short stories I found out: mind blowing and uplifting rather than grim and depressing.(over generalization, I am sure.)  From the first story, titled Baba Iaga and the Pelican Child by Joy Williams, I knew I was in a new and wonderful world.
Of  the stories I have read so far, I liked Tim Shepard's  Pleasure Boating in Lituya Bay , based on Italo Calvino's Fairy Tale Jump Into My Sack, the best but I could not get any ideas of a something I would want to create.
It wasn't until I tried out Hansel and Gretel by Francine Prose, a favorite author of mine, that I got some images and ideas for a piece.  That story seemed to march right into my imagination and tell me what to do. Lots of reasons for that, the setting is the hills of Vermont,  the narrator is 21 and after 10 days already unhappily married,  visiting a possible evil witch,she thinks, who is the mother of her new husband's  past "love of his life" .  She wonders if this is what it would be like if Hansel and the witch are in cahoots  when they are served a dinner of wild mushrooms and kid around about watching to see if she shows signs of being poisoned before they begin eating.

I got my idea for the title of this necklace from the 20 years later part of the story.  I decided that it would be a kindness to poor Polly if she could know, at least on some level, that things would turn out all right and that she would not be be subjected to such emotional cruelty by her husband for too long and that she would go on to lead a very full and productive life.  I hid messages to Polly within the necklace in the long copper tube beads.  They are stamped into the metal but disguised as beads-- which fits in with the other theme in the story. 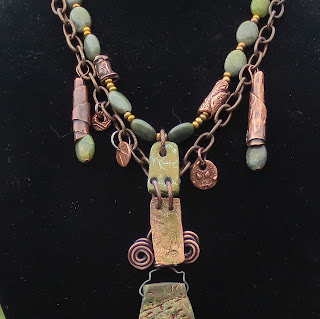 
The skirt shaped pendant is made from polymer clay and was completed in part in Christine Damm's Art on
Farm Intensive workshop earlier this month. 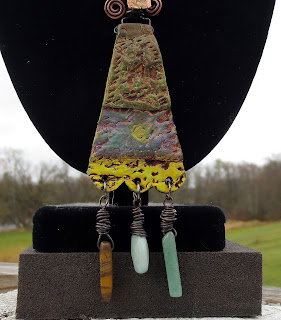 close up of the skirt pendant by Mary Harding

I did the coloring when I got home, added the wire wrapped stones, the bail and then made the metal message beads just this week. I used one of  Cindy Wimmer's tutorials in her new book, The Missing Link  to construct  the wire wrapped link, called Whirligig, to suggest the large eyes of fear our Gretel must have had that night they spent in the barn with the spooky sounds of bats and a black cat.  Halloween come early!!

All in all, story by story, and bead by bead I had a wonderful time with My Mother She Killed Me, My Father He Ate Me.  My thanks to Andrew Thornton for introducing us to this marvelous book and to Kate Bernheimer for collecting the stories under a single cover so that we could read them.

I hope you will check the other participants.  Here is the list of blog hop participants!!

Art on the Farm: A Calling to Explore and Create 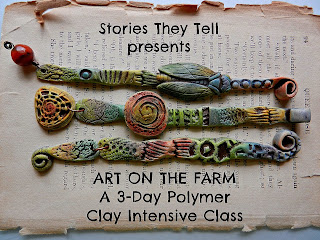 I have just been home one full day since I attended Christine Damm's Stories They Tell Intensive workshop.
I felt called to Art On the Farm by Christine's vibrant, creative and distinctly original art work which I have been following for some time.  She is a strong voice.  I wanted to spend time learning from her.

And so I packed up and went to Central Vermont at the peak of the Fall LeaF season and had a wonderful experience. 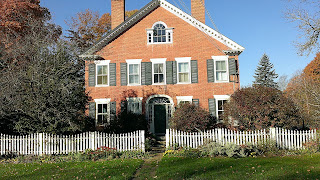 Christine arranged for us to stay in this lovely 1830's home. 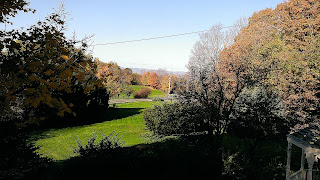 View of the landscape in  Full Fall Color in Vermont

Christine's medium is polymer clay. Mine is ceramic clay.  I had never had any experience with polymer before I entered the doors of her classroom.  It was my thought and Christine's too that her teachings can be transferred across many mediums.

We learned about FORM 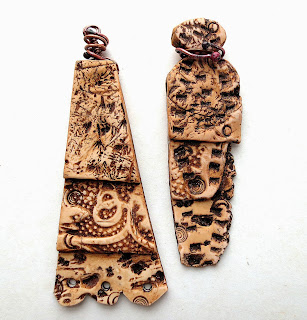 work created by me in Christine Damm's workshop

Form in polymer is much more spontaneous than in ceramic clay due to the fact that the curing is so fast and the ability to add on is so easy. 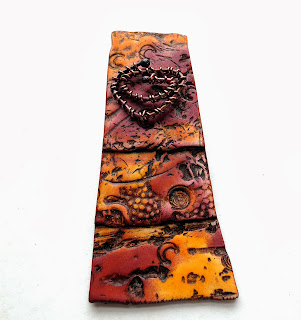 pendant colored by me in Christine Damm's workshop

Polymer is a color lover like myself's heaven
All these colors were added to the surface of the polymer. 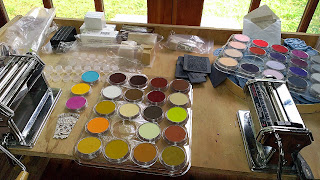 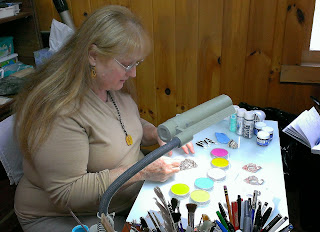 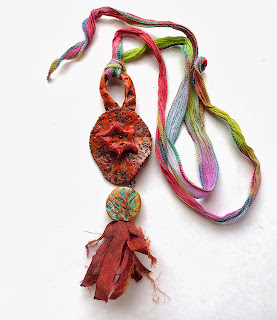 Polymer is so easy to add on to that it really appeals to my way of thinking.   None of what is here in the picture was pre-planned.  I added on the loop to hang to the pendant by affixing it to the back after it had been cured and colored.  I then decided it needed the flower in the center so I made that and added it by drilling a little hole and affixing it with a balled end head pin I had brought along to the class.  The bead and tassle at the bottom, also an afterthought, as well as the colorful silk tie.  I liked the fact that I could build on and change directions at almost any point in the process.

How do I plan to transfer all this new knowledge to my ceramic clay work?  I am not sure.  Am I going to switch mediums and give up ceramic clay?  Not that I know of.  But  I do know that this workshop has been a very freeing, eye opening experience;  that I see ceramic clay differently than beforehand; and that I am artistically richer for having  been in Christine Damm's Intensive Polymer Workshop.
Christine encouraged us to keep a journal of ideas and I know that I have been busily writing down and drawing out new ideas spawned by the workshop. I am excited to try them out soon.

When the workshop was over, we spent some time hanging out.  We visited  a charming cafe in the old train depot for breakfast where we could have talked for days and then went to some of Christine's favorite antiquing spots. 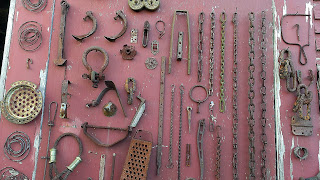 I love this wall of rust at one of the places 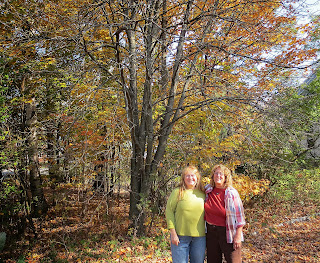 And then it was time to say  "Goodbye."

Thank you Christine for everything!!!! 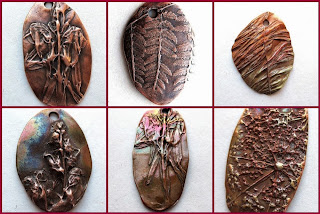 New copper clay pendants in my Etsy Shop today to kick off  The Art Walk Etsy Team First Friday Weekend. I am having a 15% off sale with coupon code ARTWALK15 to be used at checkout to get the discount.  Many of the Art Walk Etsy Team will also be having specials.  You can check them out HERE.
Coupon Code good until Sunday October 6 at Midnight. 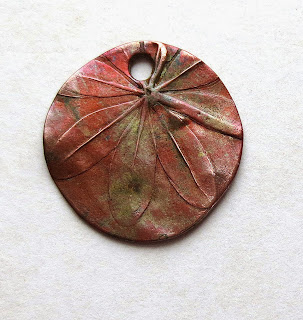 I also have some new ceramic pendants, beads and cabs in my shop: 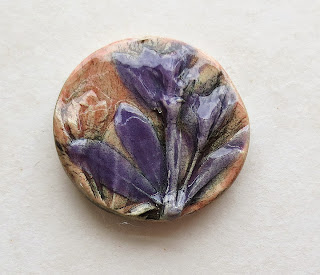 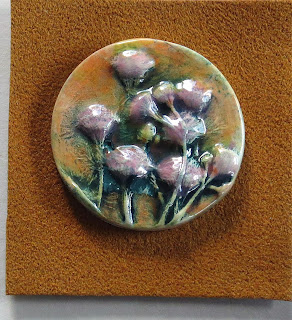 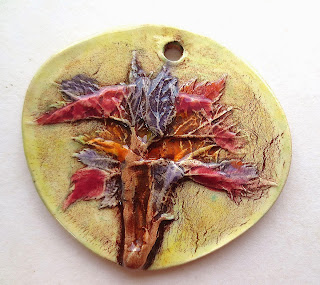 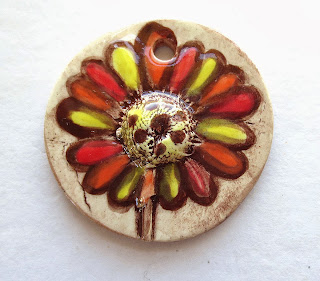 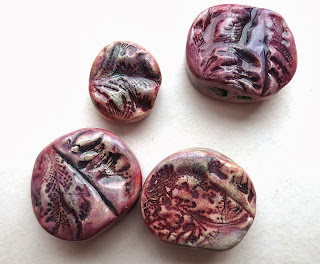 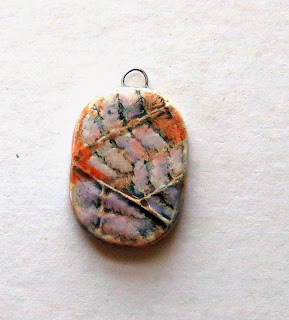 Thanks so much for stopping by,
Posted by Mary Harding at 1:03 PM 1 comment: