Inspired By Reading Book Club: October Selection The Ocean at the End of the Lane Blog Hop 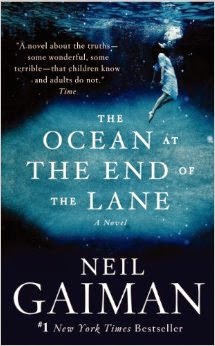 The Ocean at the End of the Lane, the October selection for Andrew Thornton's  Inspired by Reading Book Club, is narrated by an unnamed 7 year old child in the form of an extended flash back triggered by a funeral which he attends as an adult.  For me the story was a poignant tale of trauma, childhood neglect and the power of love.  I truly enjoyed reading it and found all of its mystical, sci-fi and other worldly details engrossing and emotionally charged.
I chose to use a large heart that I made from polymer clay to carry the theme of the story and added small details to particularize it. 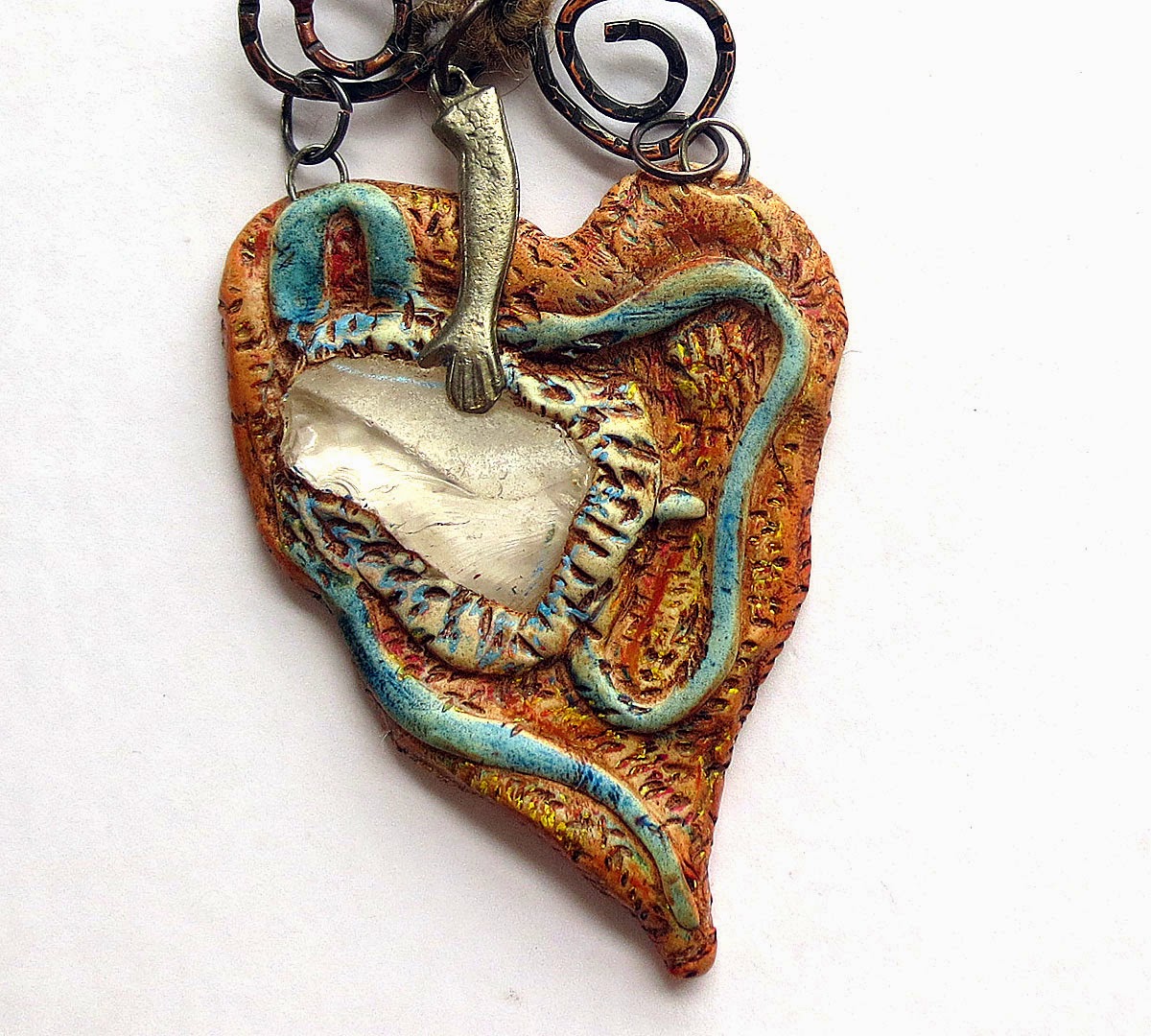 The glass piece embedded in the heart was the feeling of  ice in his heart that the narrator frequently mentions when he is feeling scared and alone during the many frightening experiences that are woven into the story both before and after his person has been invaded by "bad spirits."

When I assembled the necklace, I was especially thrilled that the arm and hand milagro that I hung from the  double spiral bail  gently touched  the "ice" in his heart.  I felt that it was a good representation of the love and safe haven Lettie Hempstock and her family provided for him. 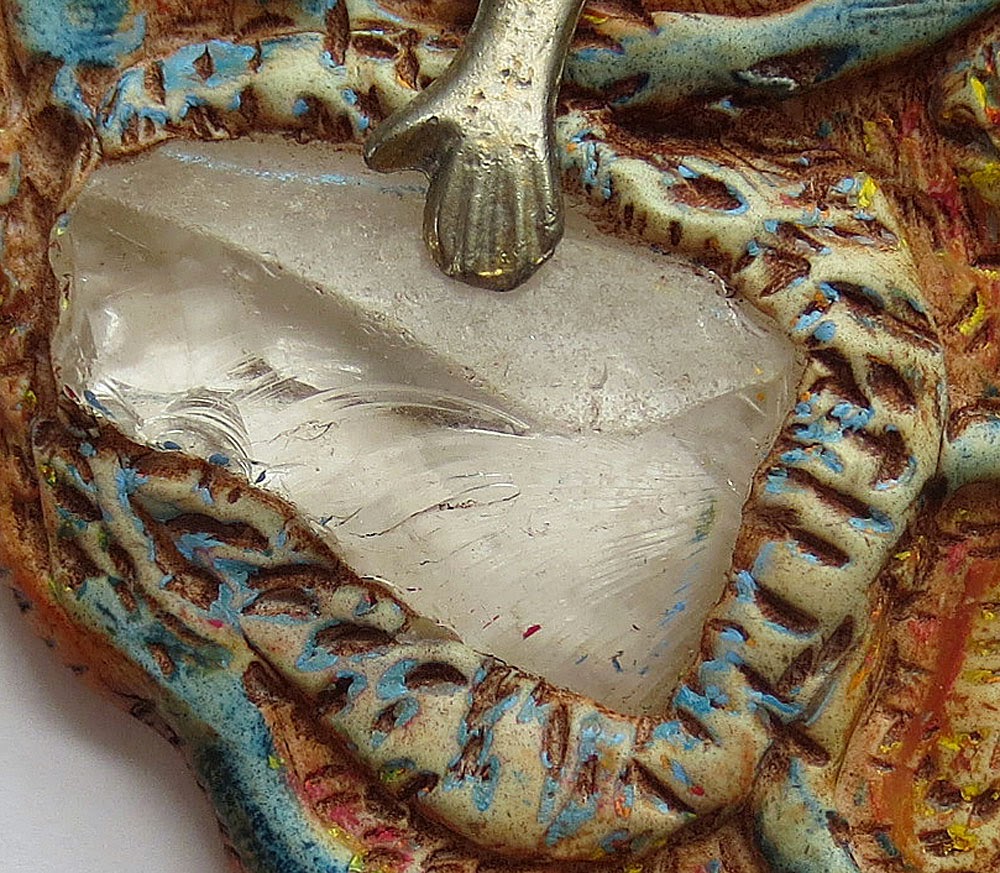 I actually made two different versions of the necklace using a different heart for each but in the end chose this one, as it was warmer and worked better with the piece of ice that I felt was essential to the telling of this story.

The necklace is strung on a partially doubled piece of natural colored linen  that is a reference to the wicked creature's appearance of being made of old ragged cloth. 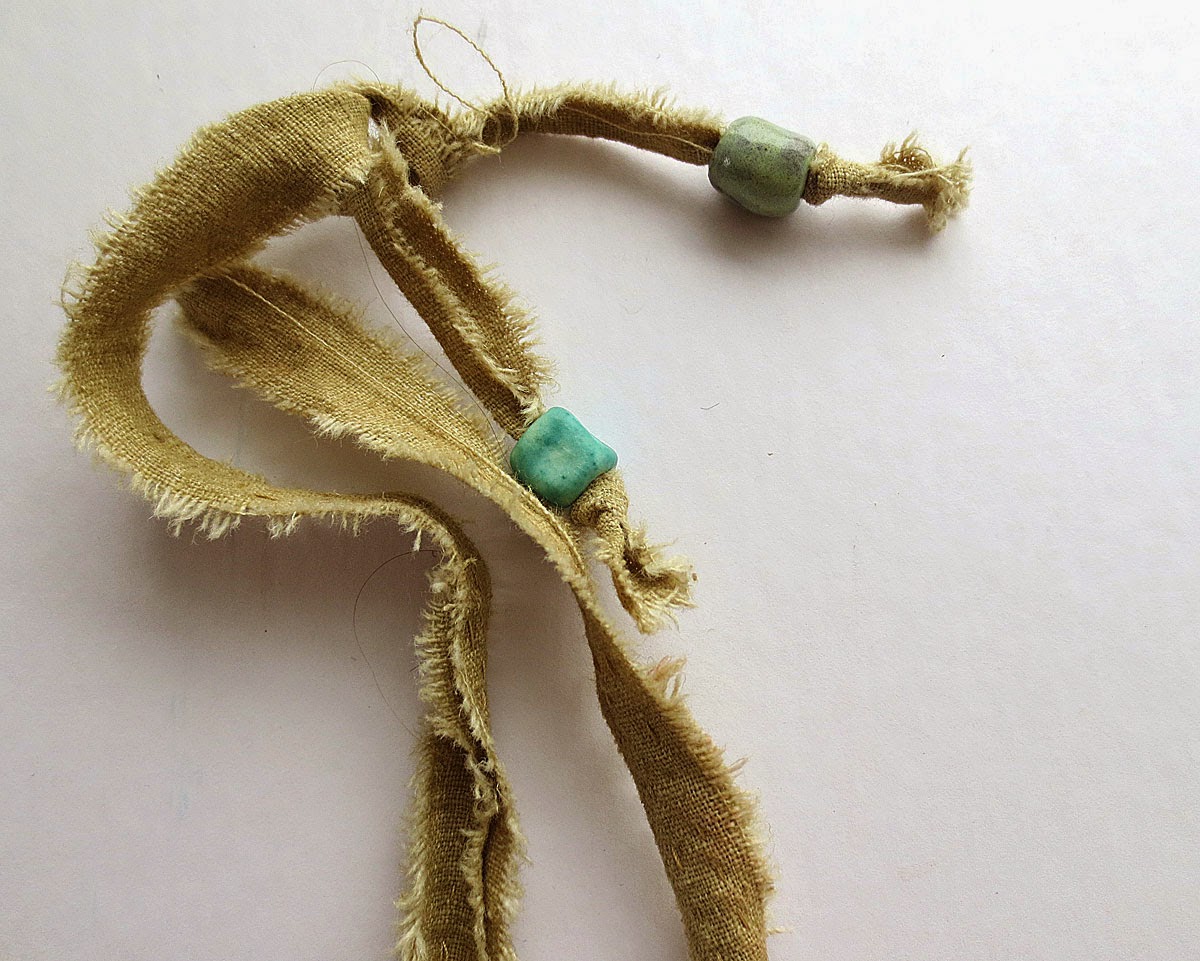 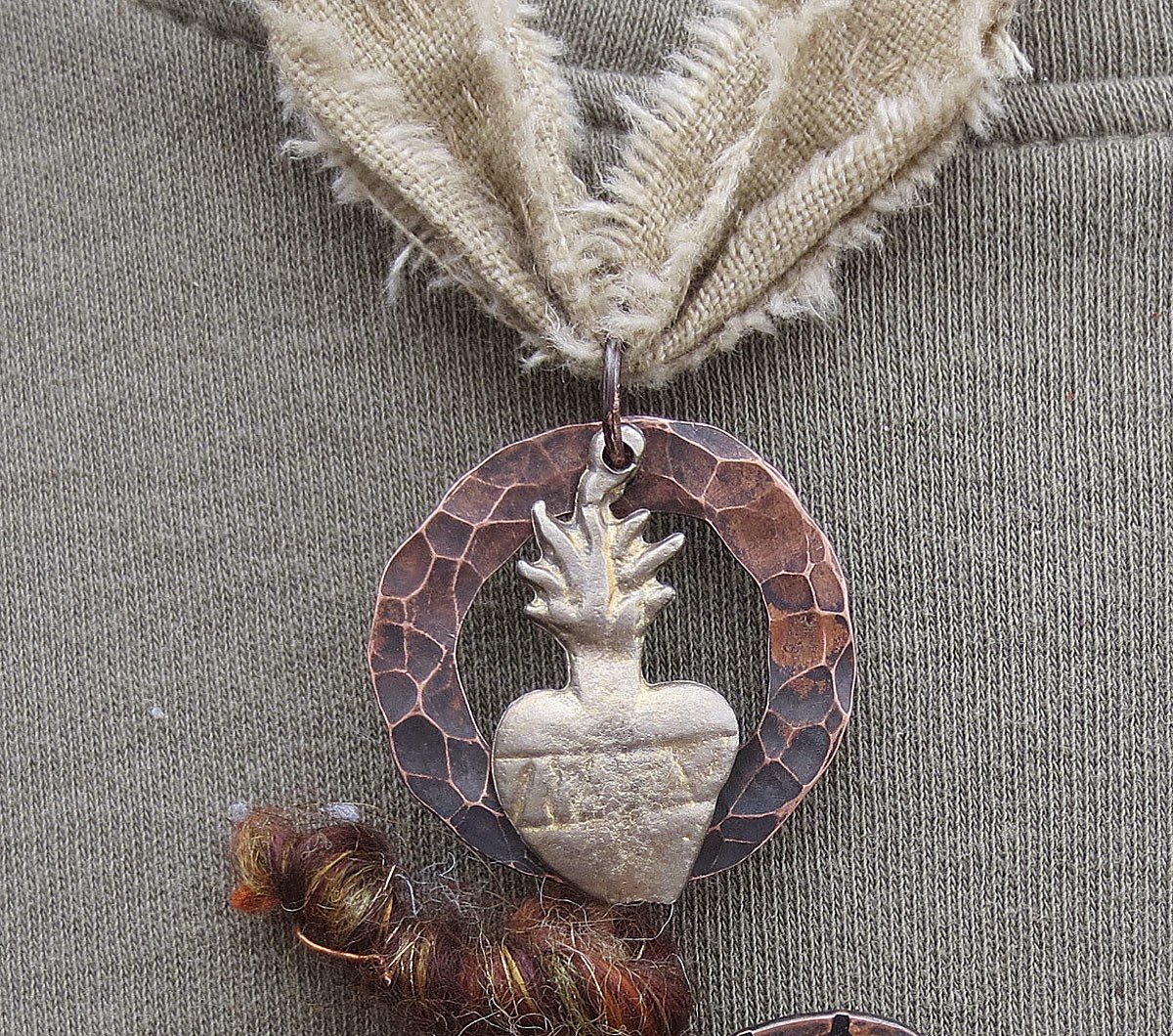 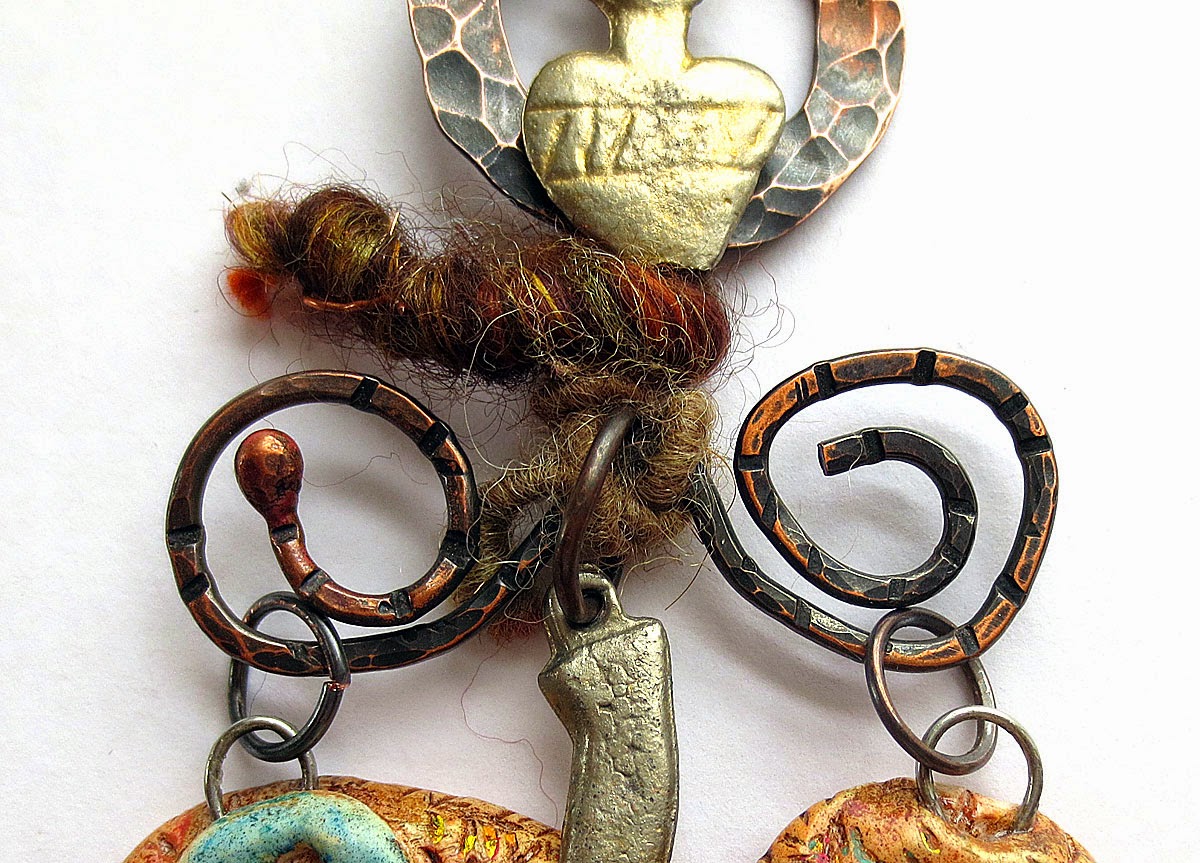 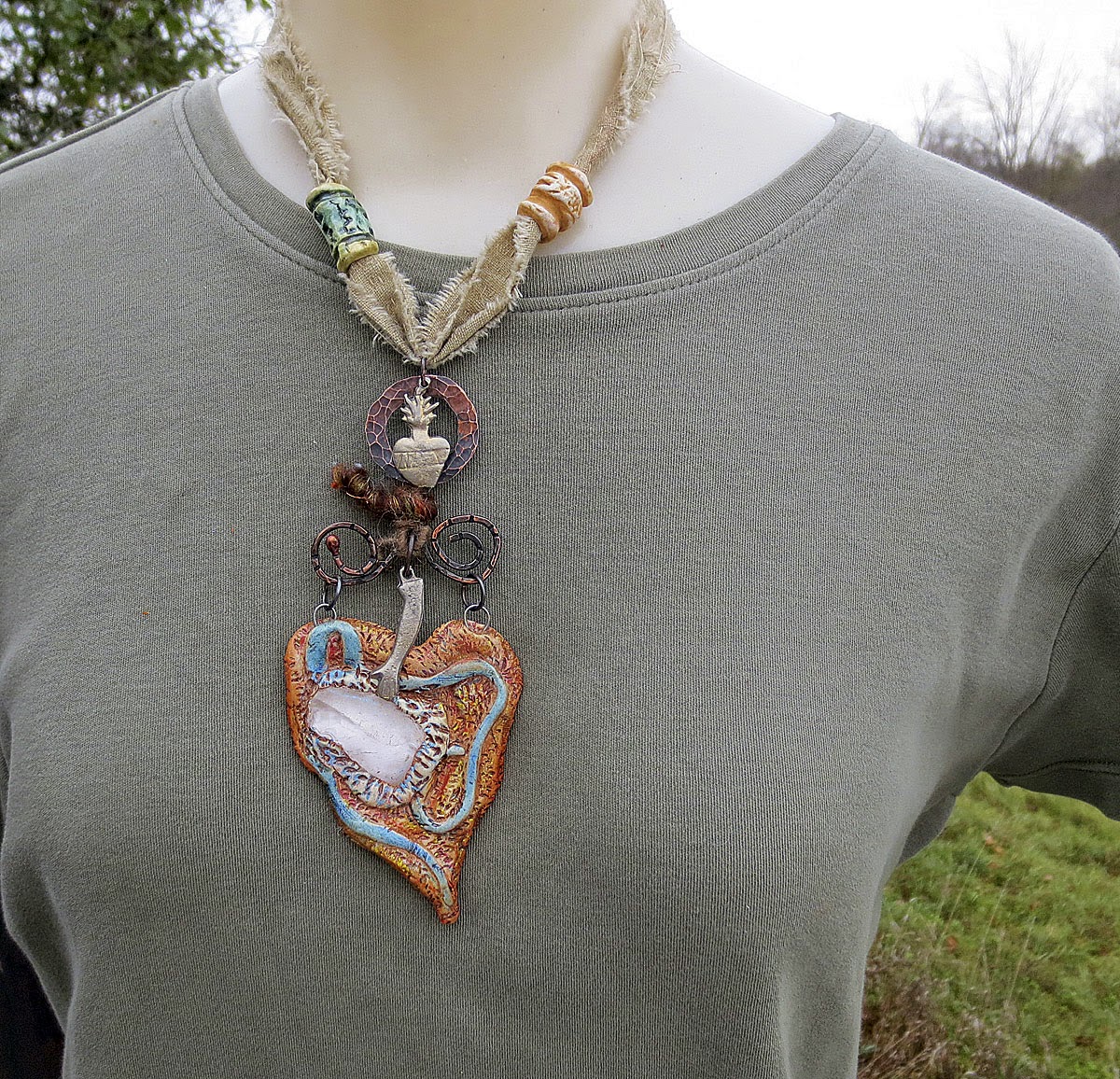 Overall view of necklace being worn

I think I liked this book so much because the Hempstocks recognized the narrator's need for love and  safety and were kind to him in such essential and fundamental ways that he was able to heal from the wounds of childhood trauma.

You can see what others made after reading The Ocean at the End of the Lane, on  Andrew Thornton's blog  HERE  Updated link list:


Special thanks to Andrew Thornton who is the one who continues to inspire us to read and create and invites you join in.
Posted by Mary Harding at 10:00 AM