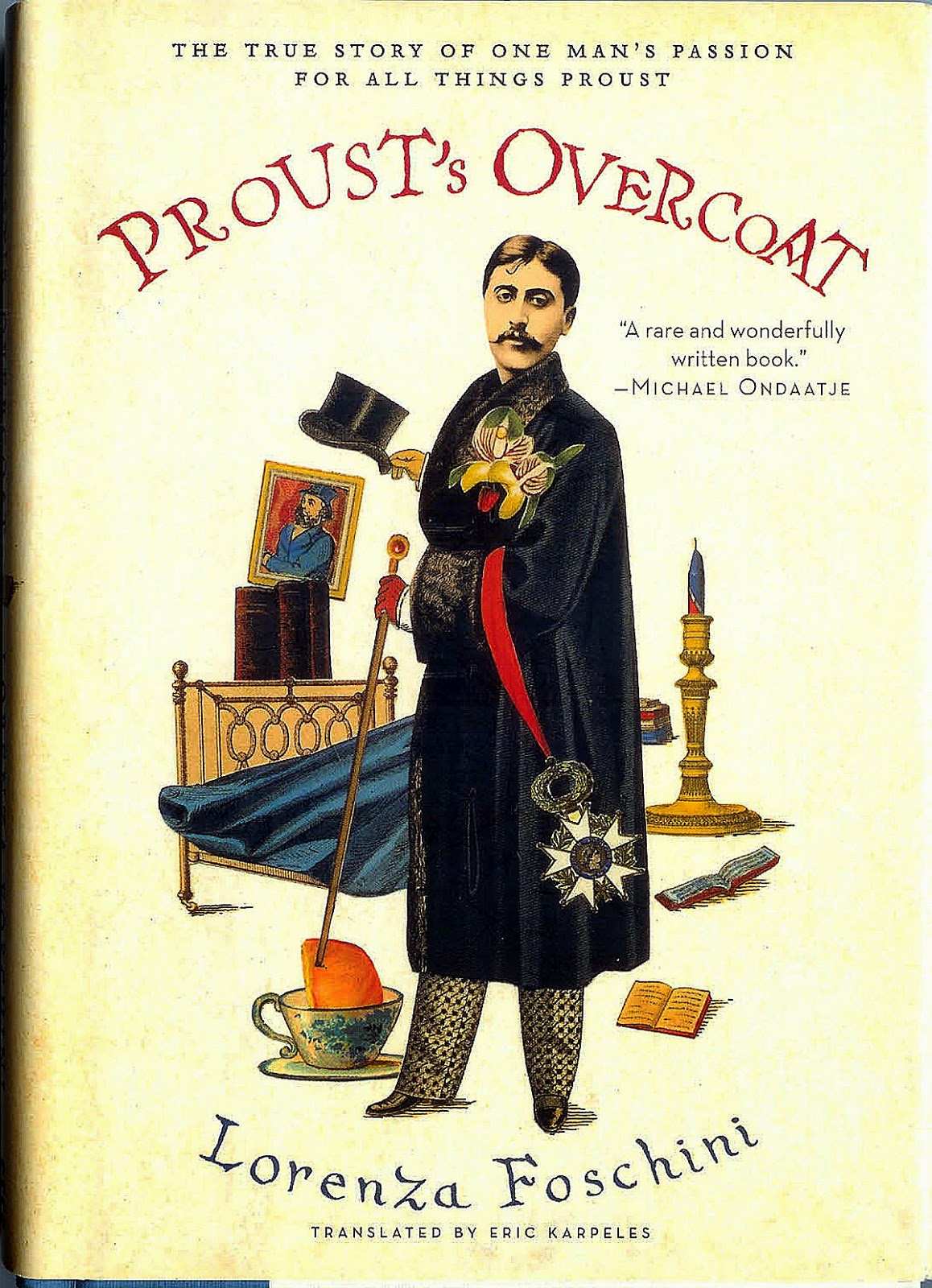 Proust's Overcoat by Lorenza Foschini is the November selection for the Inspired By Reading Book Club.  It is a true story.

I began reading this book on my ipad in a Kindle version, an excerpt, that included the first chapter or two.  Once I had gotten that far, I knew I had to have the book in hand.  So I purchased the hardcover edition, which is a small, slim book.  I am so happy I did, as one of the most moving and charming parts of this book are the photographs, beginning at the very start of the story with pictures of Marcel Prout's actual overcoat, the one he wore in bed as he wrote his maginificent, genial opus, In Search of Lost Time. Having the physical touch of the paper pages of this book was such an important part of this reading experience.  Much as Prouts' books are about associations, memories and the senses, Foschini"s book captures that essence in this short work about Jacques Guerin and how his love of books led him to preserve so much of Proust's legacy.  I was enchanted by the story and the pictures.  I was enriched by my own associations and remembrances of how I felt when I first read Swan's Way in my early twenties.  I was further enriched when I learned that Guerin helped the struggling writer Violette LeDuc by arranging for the publication of her work.  And then once more when by chance watched the movie, Violette, which my husband had included on our streaming list and I realized it was the same person.  And still more as I reread parts of the book again and again. 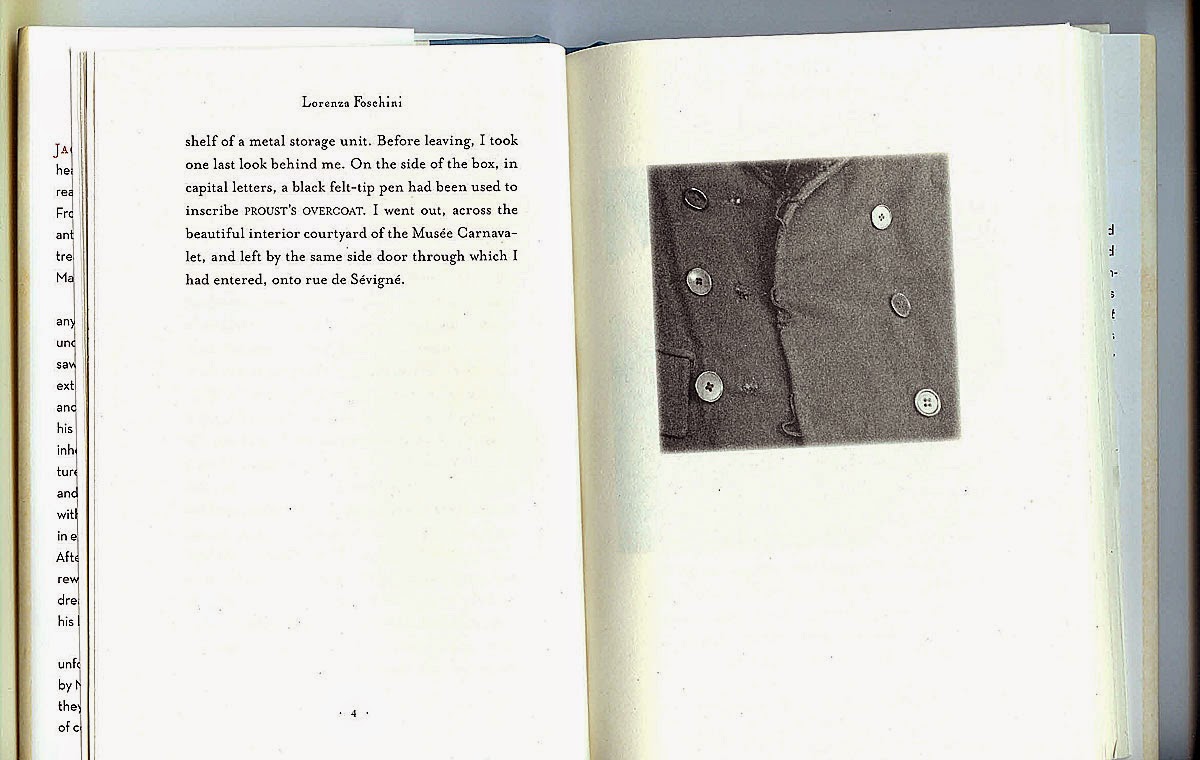 image from the book Proust's Overcoat

When I think back on what inspired me to make what I did, I think it must have been this photograph in the book.  The buttons on Proust's overcoat.  I did not in any way attempt to capture the feeling of Proust.  I simply was inspired by the idea of making a piece with buttons.  I started out with the plan that I would crochet a string of small white buttons I had on hand, in the manner I learned from Stephanie Lee's Homesteader's Metalsmithing Revamped.  They came out fine but just didn't work for what I had in mind. 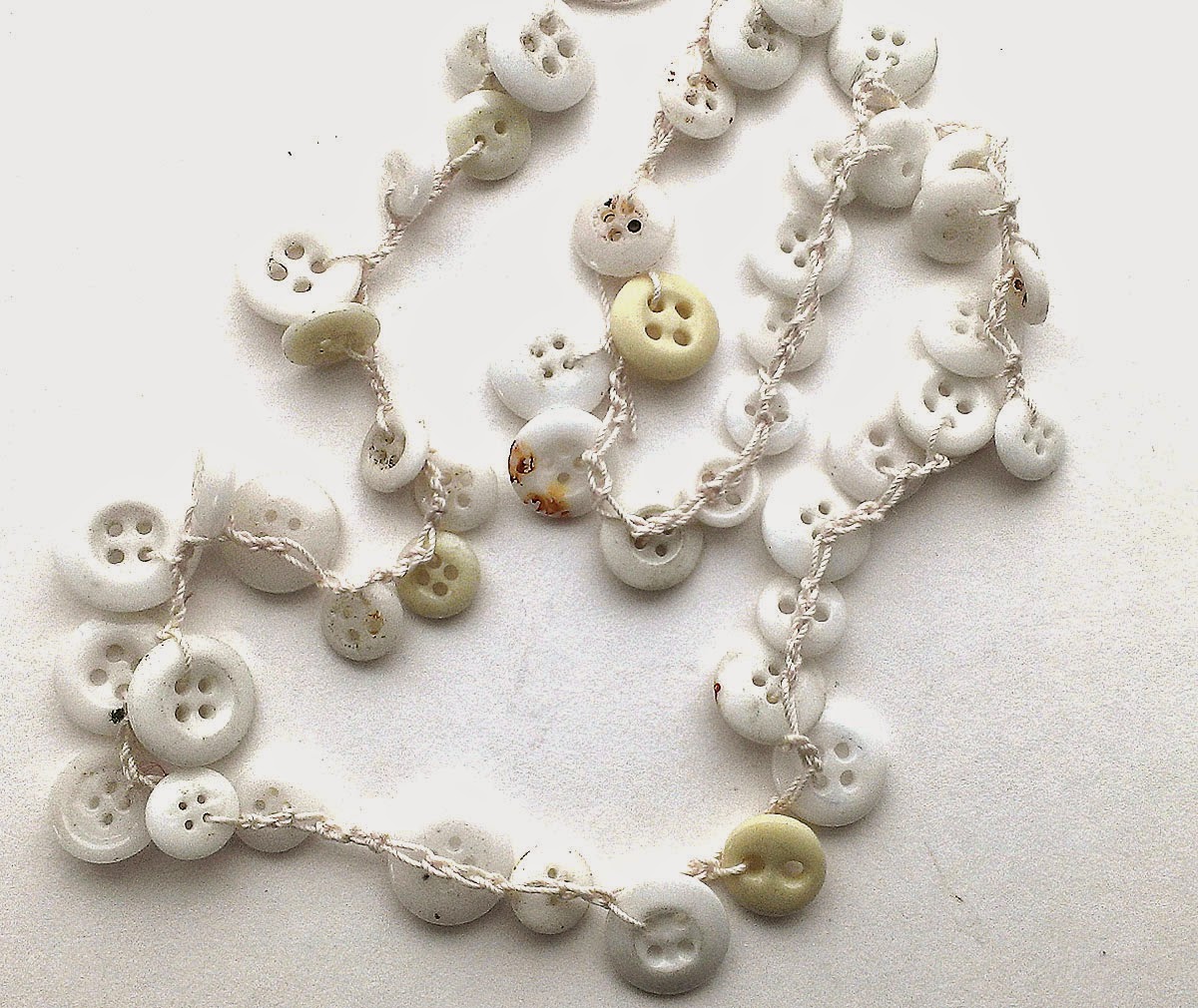 buttons linked together with crochet chain

Then I decided to use some very handsome stoneware buttons I had been given by Canadian artist Mary Anne Robblee recently. 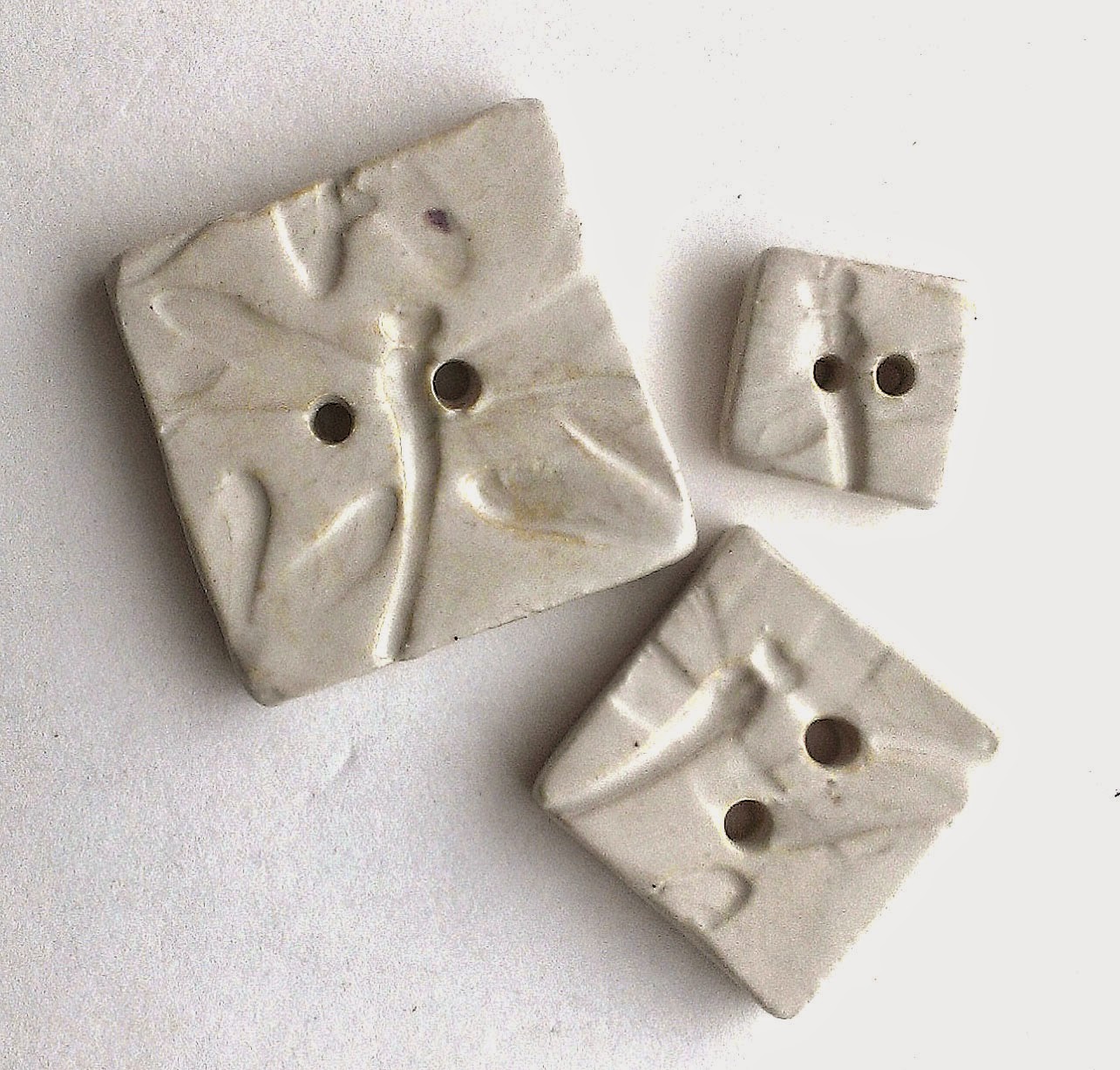 I attached them with Sari Silk to a re-purposed  cord I had hand felted some time ago. 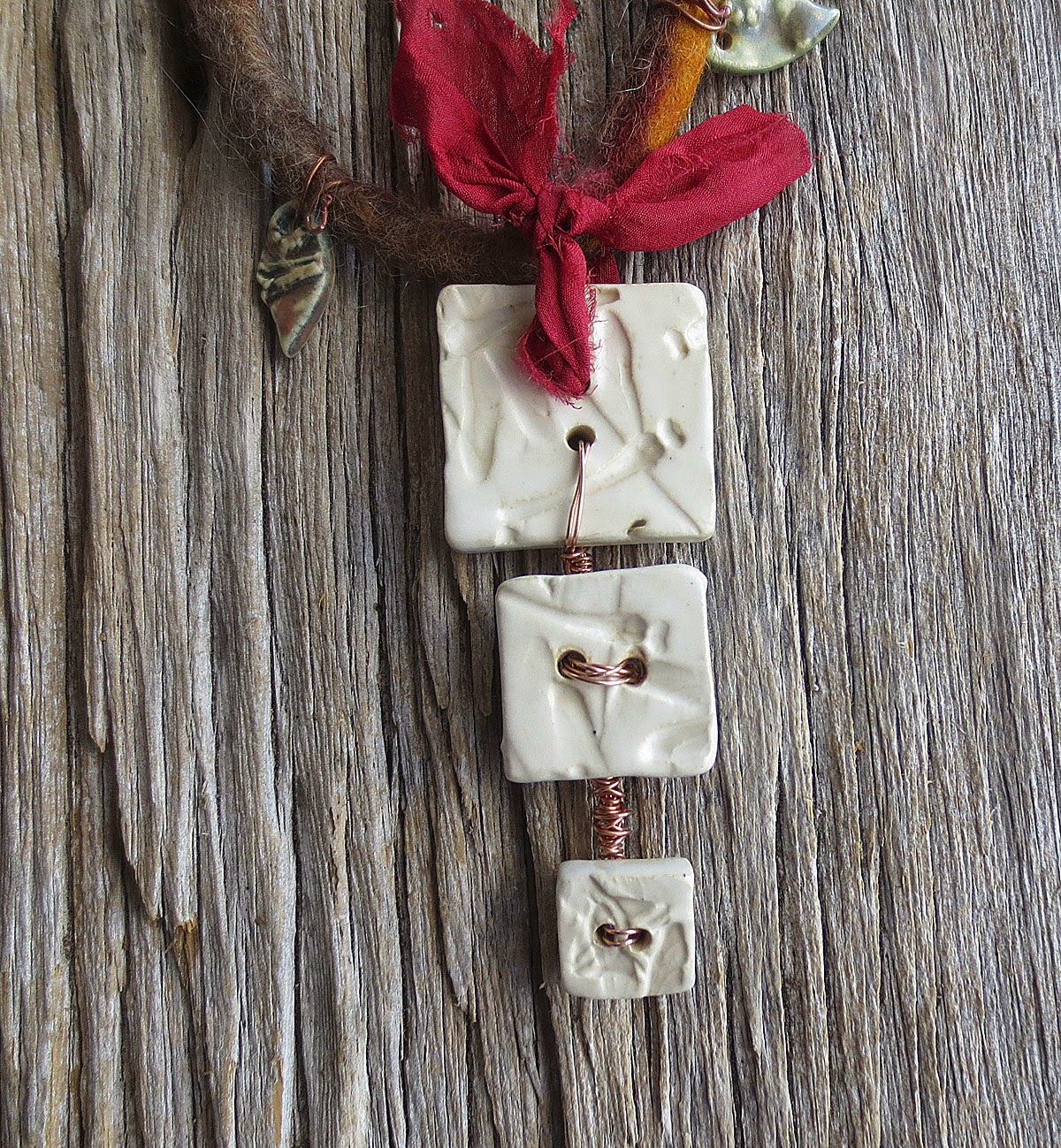 Close up of wire wrapped buttons 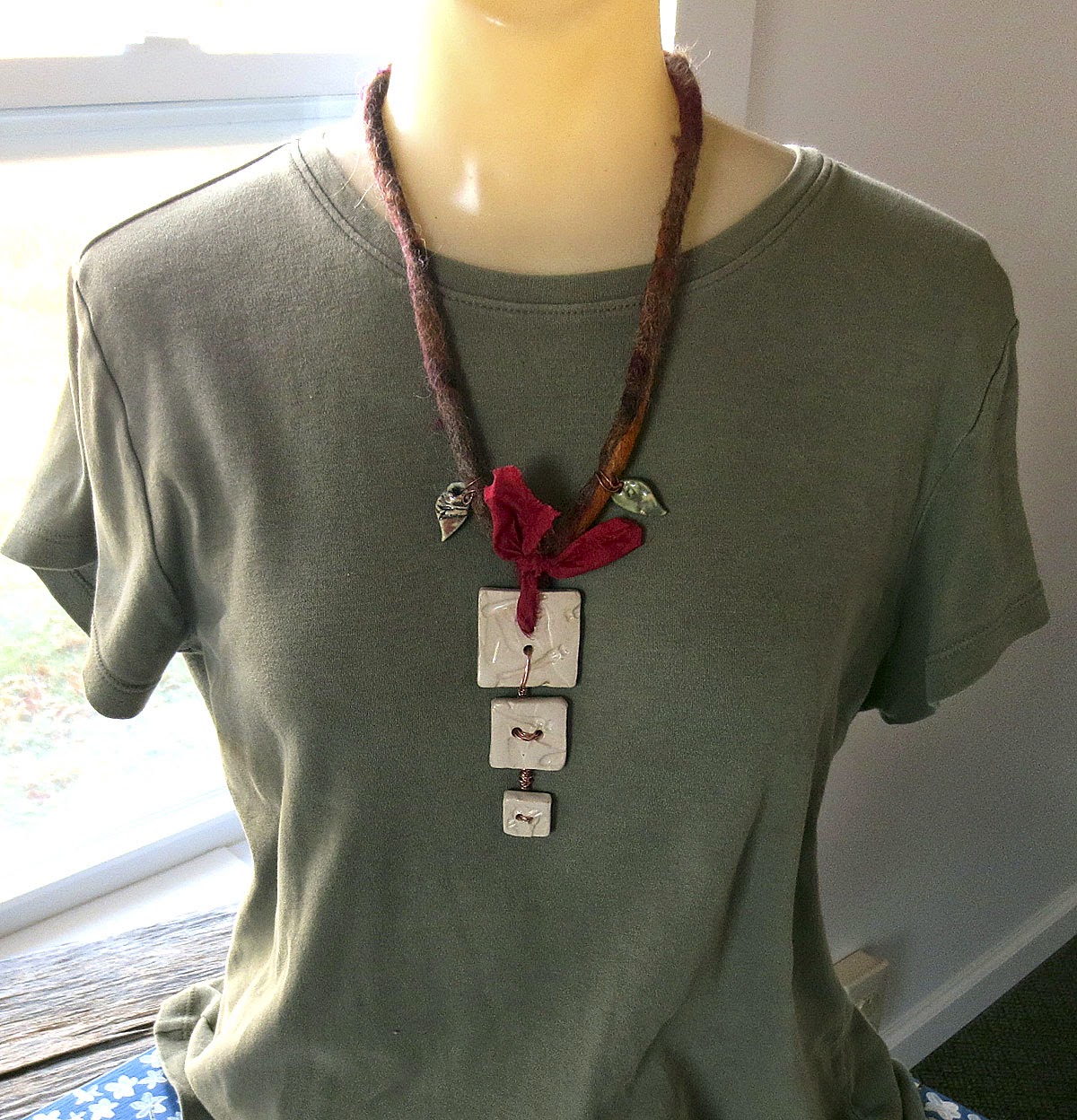 Necklace by Mary Harding--Inspired by reading Proust's Overcoat
Once again, I am so enriched by participating in Andrew Thornton's Inspired By Reading Book Club.  Thanks so much for doing this Andrew!!
Next month we will be reading Into the Wild by Jon Krakauer.  You can join in by visiting the Inspired by Reading Facebook page and asking to participate.
Thank you for visiting my blog today!!

Please stop by and see what others have created for this blog hop:
Sarajo Spurgeon Wentling http://www.sjdesignsjewelry.blogspot.com/
Andrew Thornton  his post includes his work and that of Laurel Ross and Allison Herrington
Posted by Mary Harding at 8:00 AM