Make Your Own Findings Class 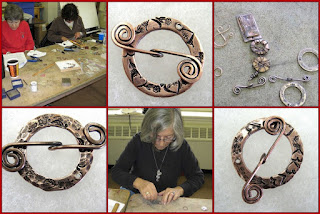 While the weather was storming this weekend, I was safely inside an historical building of Clarkson University, Snell Hall, teaching a class for our local Arts Council.  I called my class Make Your Own Findings.   While preparing for the class, I felt like an actor rehearsing.   I practiced each skill I would be teaching, wrote out the steps for the students' take home packet, and memorized my lines, so to speak.  What I noticed when the day came was that there were skills that built upon each other as we went through  making the findings I had chosen for the day.  First we made ear wires.  We started with a basic loop.  And it was that skill that that was carried through and augmented  in  the toggle bar and later the clasp.  Making a simple loop is the beginning skill of making a spiral which was used in the toggle clasp, and further developed in the spiral clasp.  The second skill that repeated itself was using a Sharpie marker to make the loop in the ear wires and the S clasp.  Students new to these skills have the most difficulty in learning to move their hands in new ways and where to put their fingers on the wire.  The jump rings combined the skills of flush cutting wire, which we learned at the very beginning of the class, bending wire around a mandrel ( the sharpie for the ear wire)and how to arrange your fngers to hold the wire against the mandrel.
The students were eager learners and very creative.  It was a fun morning:  a joyful reward after all the hours of preparation.
Posted by Mary Harding at 4:09 AM

Email ThisBlogThis!Share to TwitterShare to FacebookShare to Pinterest
Labels: make your own findings class; slcarts council